Allergies: The Facts about Seasonal Allergies

Sneezing, coughing, itchy nose and eyes during certain times of the year? You may have seasonal allergies.

Allergic diseases are the 8th most common chronic disease in the US. Hay fever alone affects more than 6 million people a year. Contrary to popular belief, allergies affect people everywhere, equally. There is no region within the US that is more “allergic” than another. And unlike allergies caused by food or animals, hay fever is caused by pollen and other plant matter, impossible to avoid or remove from your environment.

The symptoms of seasonal allergies can range from simple sneezing to more extreme symptoms, similar to what you may experience when having a cold or flu. The symptoms arise from irritants that trigger an immune response and inflammation. Symptoms fall into the two following categories:

Allergic rhinitis is one of the most common forms of seasonal allergy. The inflammation is isolated to the nasal passages but symptoms often extend to the eyes. The symptoms include clear mucous, lots of sneezing, post-nasal drip (clear mucous that runs down the back of your throat), congestion (nasal passage constriction), nasal itchiness, and red, watery and often itchy eyes. These symptoms are categorized into intermittent or persistent and mild or moderate-severe. Intermittent means you only get these symptoms certain times a year while persistent means you tend to have symptoms year round but may experience seasonal fluctuations in the severity of symptoms. Mild and moderate-severe refer to how much your life quality suffers and your productivity drops.

While most seasonal allergies are isolated to the nasal passages, some individuals experience more complicated symptoms involving the sinuses. Rhinosinusitis, often just referred to as sinusitis, involves inflammation of both the nasal passages and the sinuses. The sinuses are air filled cavities lined with soft tissue (like the nose and throat) that lie behind the bones of your face. They help moisten, filter, and warm or cool the air that we breathe in. While sinusitis can be associated with different causes, many people experience chronic, recurrent symptoms resulting from allergic reactions. The symptoms include, facial pain and pressure, headaches, nasal congestion, a runny nose, and sometimes general achiness or fatigue. These types of allergy symptoms often get mistaken for those of the flu or cold. Inflammation of the tissues lining the sinus cavities causes swelling, and this in turn narrows the passageways resulting in increased pressure and pain. This is often referred to as the sinus headache.

You probably know that the most common cause of seasonal allergies is pollen. Pollen and other plant products that get into the air gain access to your airways when you breathe. They behave as allergens, substances that causes an allergic reaction by 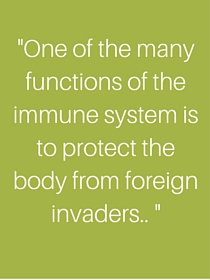 The immune system is taught to recognize and accept “self” and to eliminate anything “non-self.” The exceptions to this includes tolerance to things like food and inert substances. In allergic rhinitis and rhinosinusitis, pollen in the nose and sinuses is recognized by the immune system as non-self. This triggers the immune system, which in turn, mounts a response to eliminate the threatening pollen. The response isn’t too unlike that associated with immune response to infections. That’s why the symptoms can be similar to having a cold or flu.

Non-seasonal allergies that persistent year-round can be attributed to common allergens like pet dander, dust mites, cockroaches, molds and cigarette smoke. These allergens trigger the immune system the same way pollen does, resulting in similar symptoms. In most cases the sources of theses allergens can be easily removed from the environment, unlike pollen-related allergens.

Why do some people have allergies and others don’t? It comes down to what I mentioned earlier…tolerance. When the immune system is educated, it learns tolerance to “self” so it doesn’t attack it’s own body. It also learns that some non-self substances are to be tolerated, including environmental substances that we take-in through breathing, like pollen. Some people have immune systems that are very tolerant while others have immune responses with a lower threshold, perceiving pollen as a non-self threat.

As I explain in my book, “Do Your Body a Favor: 7 Steps to Prevent Disease and Maintain Your Health,” our fundamental differences in how we respond to disease, and in this case allergic reactions, is related to three factors; our genetics, our epigenetics, and our gut microbiota. 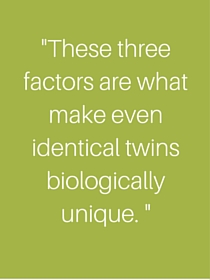 These three factors are what make even identical twins biologically unique. In short, the genes that we inherit from our parents determine what types of immune responses we will have but our genes are influence by both epigenetics and our gut bacteria.

Epigenetics is the control of our genes. For example how often a gene product is made. Let’s say you have a gene that is partially responsible for immune tolerance, epigenetics will control how often and/or how much of that gene product is made. This ultimately changes how tolerant an individual becomes of certain substances. In addition to the control of genes by epigenetic regulation, the gut bacteria also have an educating influence on immune tolerance. While this mechanism is still being researched, it likely controls tolerance at a cellular level rather than a genetic one.

Ok, enough science for one day…but now you’ll sound really informed and super nerdy when you tell your sneezing friend, “Hey, did you know that your allergies are influenced by epigenetic regulation?” 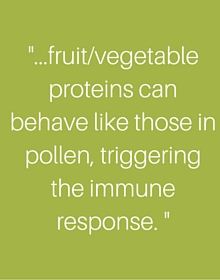 The proteins that make up pollens can often be similar to those found in fresh fruits and vegetables. When your immune system is in a heightened allergic state, these fruit/vegetable proteins can behave like those in the pollen, triggering the immune response. It’s really a case of mistaken identity. The symptoms of OAS are mouth and/or throat itchiness* immediately upon eating the fruit or vegetable and up to an hour after.

Certain pollen allergies are associated with particular fruits or vegetables. For example, birch allergy is associated with tree fruits (ie. apple, apricot, peaches, cherries and plums), along with some nuts and legumes, and vegetables in the carrot family including parsley and celery. In contrast, ragweed allergies can heighten allergies to the melon family, bananas, and cucumber, white potato, and zucchini. The food-associated symptoms of OAS fluctuate seasonally and correspond to your pollen allergies.

*Severe food allergies leading to anaphylaxis can also begin with itchiness in or around the mouth and of the throat. If in doubt, seek medical attention immediately as anaphylaxis reactions are life-threatening.

Just like nasal and sinus passages, the lower airway can be responsive to pollens. When pollens trigger an immune response in the lower airway the result is allergic asthma. The symptoms may include difficulty breathing, shortness of breath, wheezing, coughing, chest tightness, and chest pain. These are serious symptoms that should have you seeking medical help immediately. Allergic responses in the lower airway lead to inflammation just like in the upper airway. This inflammation causes the symptoms experienced in allergic asthma. Like nasal passage constriction, the inflamed lower airway tissues swell and constrict the air passage. In addition, the allergic response triggers bronchoconstriction, the involuntary contraction of smooth muscle around the air passage. This leads to further constriction of the airway and explains the difficulty breathing. Asthma comes in many forms and can be triggered by factors other than pollen. If you’ve experienced asthma-like symptoms, then it’s time to see your physician.

Skin rashes can be another health concern linked to seasonal allergies. Atopic dermatitis, characterized by itchy, red patches of skin, has been associated with hay fever and allergic asthma. Physicians refer to this combination as the “atopic triad.” Individuals that experience hay fever and allergic asthma often experience atopic dermatitis as well. Like asthma, dermatitis can be caused by many factors other than allergy but if you are a hay fever sufferer then you should be aware of the link between the two.

Treatments for allergic reactions tend to take the same strategy, target the immune reaction creating the allergic symptoms and inflammation. Probably the most common treatment for allergies are anti-histamines. As the name implies, these drugs help block histamines, a key player in allergic reactions. There are several approaches to blocking the action of histamine and each drug has it’s unique way. So if one anti-histamine drug doesn’t work for you, another may. Anti-histamines are available over-the counter (OTC) but do consult your physician if you’re taking anti-histamines for the first time or have had any changes in your health or medications since you last took them.

Another approach to stopping the allergic reaction and decreasing inflammation is the use of glucocorticoids or steroids. For rhinitis and sinusitis, intranasal glucocorticoid sprays can be very effective. These sprays are particularly good at helping alleviate nasal congestion and can help improve related eye symptoms as well. Some steroid nasal sprays are now available OTC while others remain prescription only. In more severe or refractory cases, oral steroids may be prescribed. Nasal steroid sprays

act locally, directly on the nasal tissue, with little of the drug leaking out into the rest of the body. Oral steroids go systemic (body-wide), having a greater impact on the immune system functions.

You may have heard of “allergy shots,” medically referred to as specific allergen (injection) immunotherapy (SIT). This therapy involves administering doses of specific allergens (like pollen) at low doses with the intention of desensitizing the immune system, thereby limiting its reaction to environmental allergens and relieving symptoms. SIT is most commonly used to help treat allergic rhinitis and to a lesser extent allergic asthma. The data of how effective SIT can be is actually a mixed bag. The strongest data seems to come from clinical studies of seasonal allergic rhinitis using grass, birch, and ragweed pollens. Even in individuals that didn’t respond to other treatment options, like anti-histamines and steroids, SIT helped decrease their symptoms. How long the therapy lasts after the injections stop is also debated. The best data suggests relief for treated individuals can be expected to last for up to 3 years. Some studies have reported as long as 10 years.

If you suffer from seasonal allergies, and haven’t already, talk to your physician. There are many treatment options and as I mentioned earlier in the post, if one drug doesn’t work for you don’t assume none will. And if you can’t find relief, then you may want to consider SIT. It’s estimated that 60% of individuals that suffer from seasonal allergies can’t get adequate relief from antihistamines and nasal sprays, even when using the maximum dose. Other quality of life issues like drowsiness and nose bleeds are reasons for pursuing SIT treatment.

Until next time, stay well! 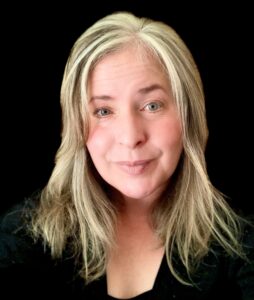